Umeå is home to a number of interesting buildings and works. Together with Umeå's former city architect Tomas Strömberg, Visit Umeå has produced a guide to the city center's most exciting architecture.

Here's how to read the guide::
Follow the numbers placed on the map. Each mentioned building has been given a letter between a and u. They are all placed on the map so you can easily find all the interesting buildings and works in Umeå center.
. 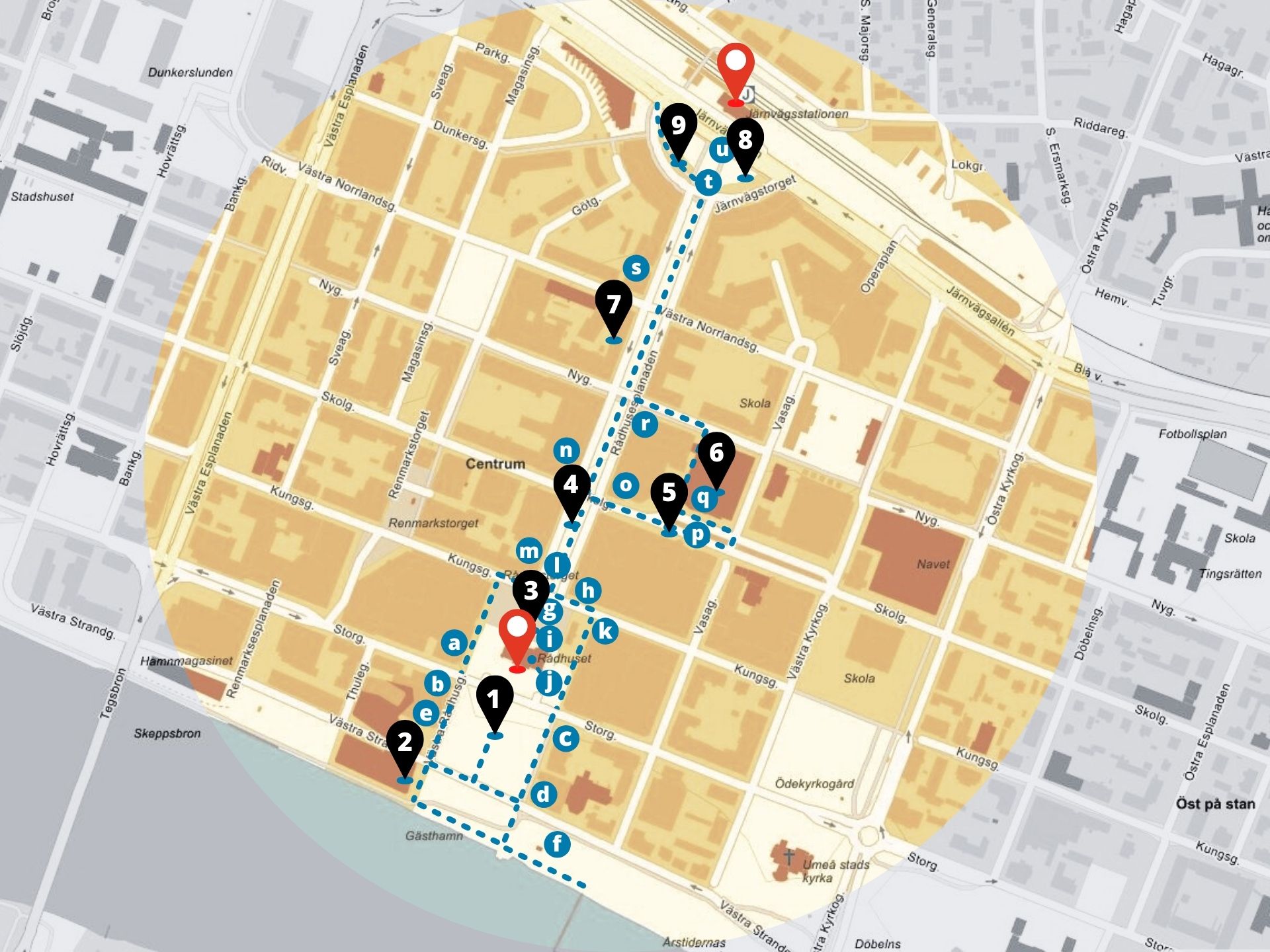 One of Umeå's most well designed and historically preserved places where the absolute majority of the buildings around the park were added immediately after the city fire in midsummer 1988. The place could at that time be seen as a welcoming entrance to Umeå when you arrived in Umeå by sea. As early as the 1860s, Rådhusparken was laid out and the first birch-planted streets began to be arranged. Since 2015, a renovation has been carried out with more plantings, addition of trees, new seating and hang out places and a renovated fountain that further improves the already popular meeting place.

The design was made by landscape architect Ulf Nordfjell and follows the design program that was developed for the entire city space, from the City Hall to the river bank. The buildings that line Rådhusparken were designed by the most prominent architects and builders of the time. Sparbankshuset (a) designed by Torben Grut, Stora Hotellet (b) by Viktor Åström, Handelsbanken (c) by Ernest Stenhammar and the old electric power house (d) (which was also used as a fire station) by William Stolpe.

Fun Fact! Umeå received electricity as early as 1892 when Umeå's steam power plant was inaugurated, which gave light to large parts of Storgatan through 36 street lights for Umeå's 3,447 inhabitants. 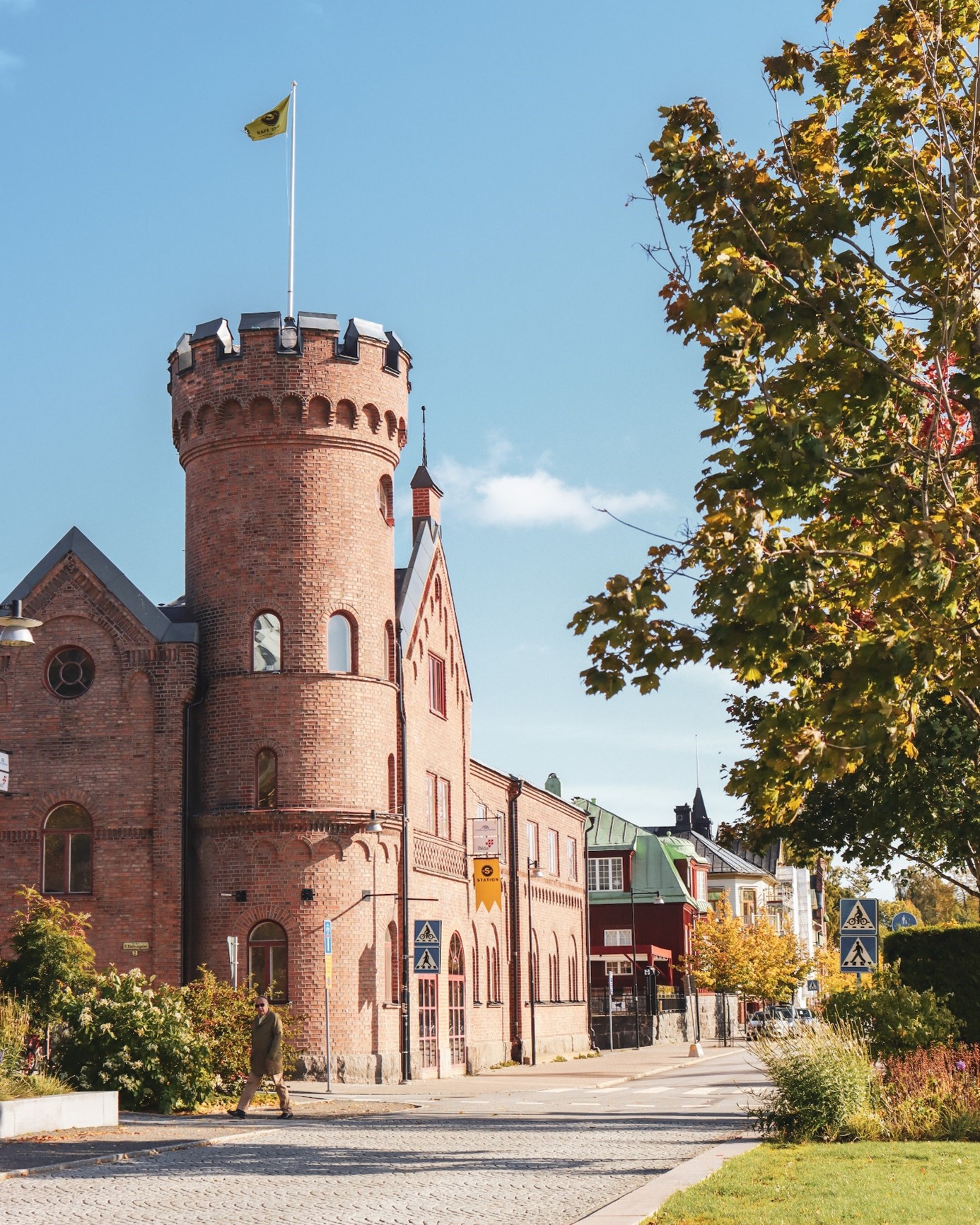 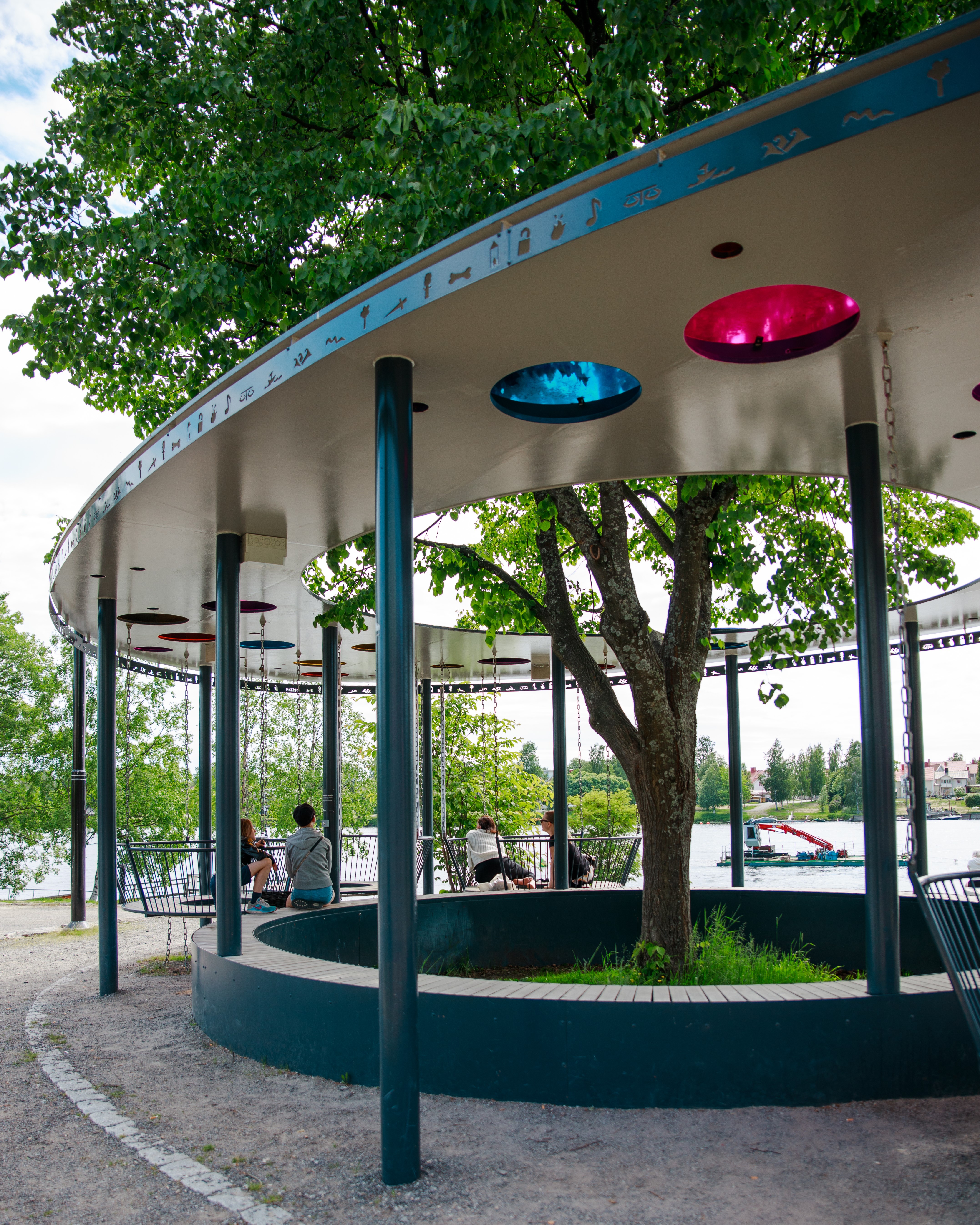 "Årstidernas was inaugurated in July 2014 in connection with the European Capital of Culture year and has quickly become a favorite place for many Umeå inhabitants." 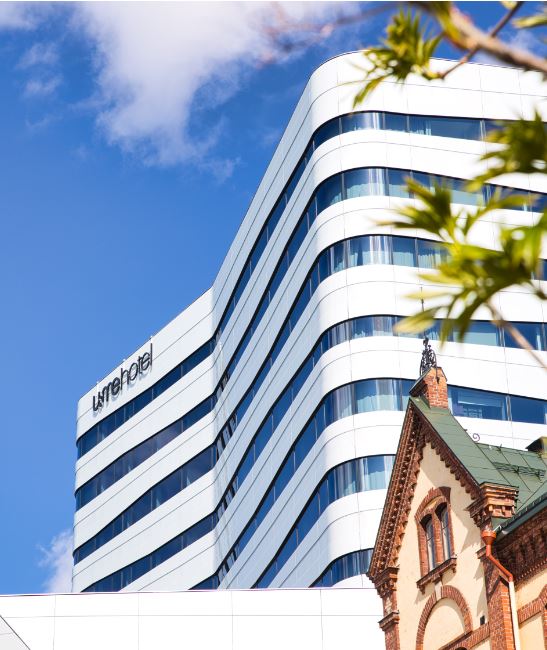 Further down in the park, the river landscape and Väven (e) widen, a result of the ambitions to turn the city towards the river during the Capital of Culture year. Väven iinclude Umeå City Library, but there are also studios, children's culture center, theater premises, a restaurant, cafés, two salons for Folkets Bio, Kvinnohistoriskt museum and two hotels. Väven is designed by Rune Grasdal at Snöhetta and Maria Olsson and Lennart Sjögren at White Architects in Umeå.

Rådhustorget (g) and the district Forsete (h) have undergone an almost total transformation during the first years of the 2010s. This has been made possible by demolition as well as extensive interventions in both buildings and streets from the 1960s. In addition to the Utopia mall, there is a school and terraced houses, which have been built on the roof of the older building. A partially recessed and diagonal hotel part strives towards the sky, which is especially noticeable if you arrive from Rådhusesplanaden. Here, too, White Architects through Lennart Sjögren is the architect. Note the perforated band that connects the different parts. The band is designed by Monica L Edmondson.

At Rådhustorget, designed by landscape architect Thorbjörn Andersson, you must not miss the sculpture Listen (i) by the artist Camilla Akraka. The sculpture was commissioned by Umeå municipality's cultural committee and will symbolize a stance against sexual harassment. In folklore, the sculpture is usually just called "Metoo-puman" or "puman". In the square there is also the sculpture Standing Man by Sean Henry.

The town hall (j) was designed by Umeå's first city architect, Fredrik Olaus Lindström, who designed both the city plan after the city fire of 1888 and several of the city's parade buildings. The town hall is in the Dutch Renaissance and has been given both a dignified and festive character. Rådhustorget is Umeå's obvious center where Rådhusesplanaden, Umeås parade street, which runs between the town hall and the railway station. Much of the place's appearance and design has changed over time, but the relationship between buildings and street land, the neighborhood structure - in street life, has remained just like the status of the square and the esplanade in the center.

Fun fact! Check out the works of art on the facade of Umeå-born Stig Lindberg. The shapes that resemble fish, bread and flowers, among other things, would associate with the department store's operations. 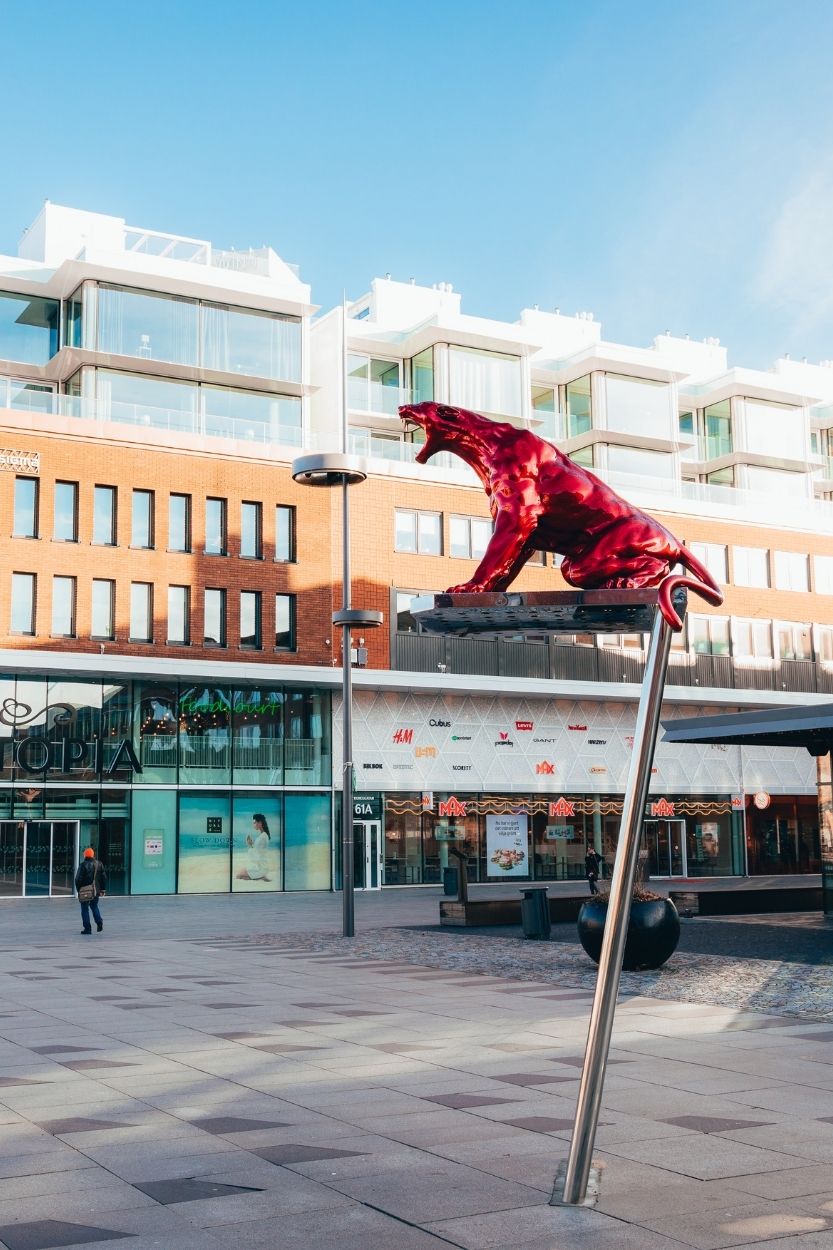 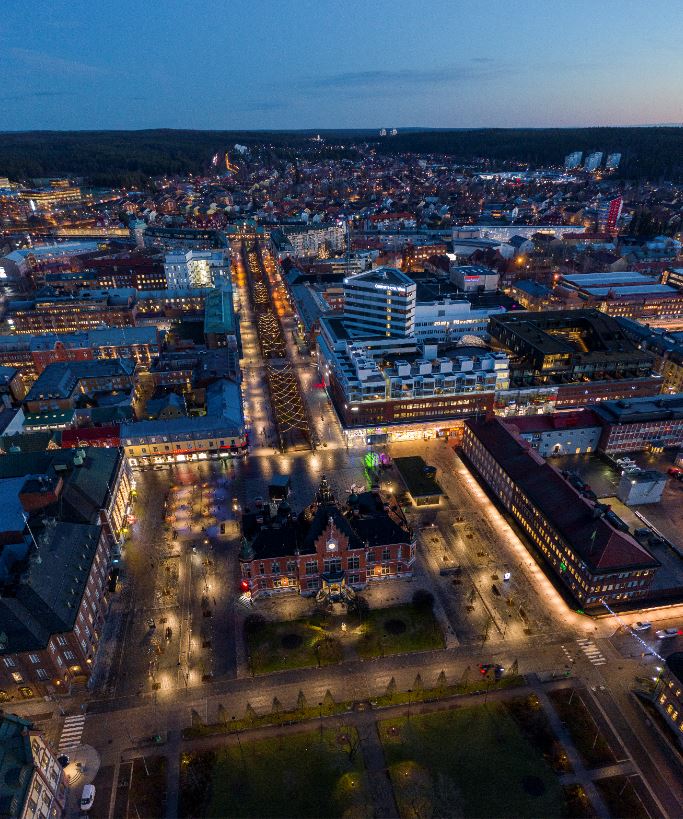 Rådhusesplanaden (l) is characterized by a wide central axis with large elements of greenery which, in addition to having a fire-separating function, has also been designed as a parade street between the town hall and the railway station. The town hall plan has between Skolgatan-Västra Norrlandsgatan, modernized in 2019 but is still a green, accessible and safe place right in the center. On the park strip in the middle there are now many different types of seating and in some parts there is play equipment.

On the west side of the esplanade, there is the so-called Edgrenska house (m) with partly older buildings but also newer buildings. The original scale is partly intact and on the other side you can see how the house heights along Rådhusesplanaden have gradually increased. The four-storey Valandhuset (n) will be built on with three more storeys, albeit indented but visible. Valandhuset has a symmetrical façade with alternating light and heavy façade sections and was designed by the Umeå - born architect Erik Thelaus in 1965. A fine representative of 1960s architecture in Umeå.

A detour during the journey up over Rådhusesplanden is Vasaplan (p) which was designed by the architect Gert Wingård. A modern terminal built entirely of wood with increased capacity for buses but which is also designed in great citizen dialogue. The transverse walls carry four layers of glulam beams, on which the glass roof rests. The two large roofs together cover a 160 meter long and 10 meter wide surface.

6.    Folkets hus
At the alley towards Nygatan you will discover Folkets hus (q). The architect Olle Qvarnström has designed both of these fine representatives of 1980s architecture as well as the space in between. The location is recently modernized but still represents a small sensual place to retreat to, immersed in the middle of the city. 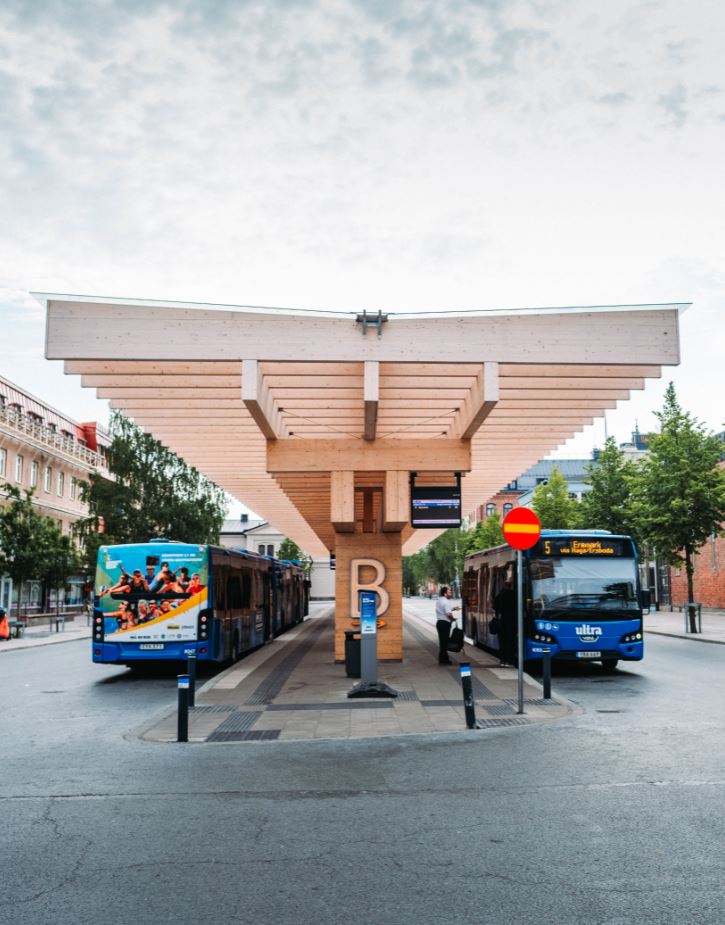 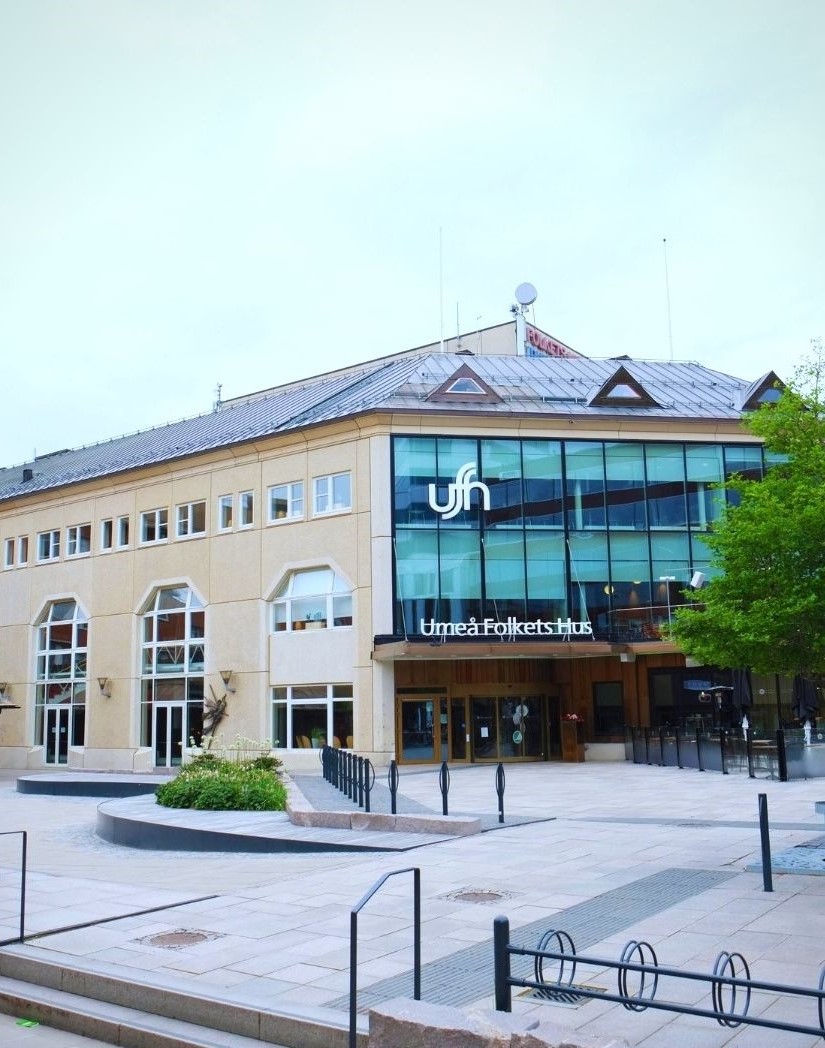 "The location around Folkets hus has recently been modernized but still represents a small sensual place to retreat to, immersed in the middle of the city. "

Once out on Rådhusesplanaden, you continue your walk where new and old architectural expressions line the esplanade. The former and now rebuilt post office (s) in blue, originally designed by the architect Erik Lallerstedt, now houses a restaurant and the classicist brick building that was originally built for Västerbottens-Kuriren, now houses a variety of businesses. The austere building from the early 1930s was designed by architect Robert Laurell. Functionalism had not yet arrived in Umeå.

A new addition on the west side of the esplanade is Länsförsäkringar's new office. The building, designed by LINK architecture, is a new contemporary addition to the city's parade street. The meeting between the older and the newer architecture in Umeå becomes apparent when you look at the much smaller, plastered building with an elegant corner tower (s) on the other side of Norrlandsgatan. Older buildings on this scale with plastered facades are and have been a frugal experience in the wooden city of Umeå but are today one of the few remaining. Further in the yard, the scale shifts are clear, but the neat shop building is very impressive. 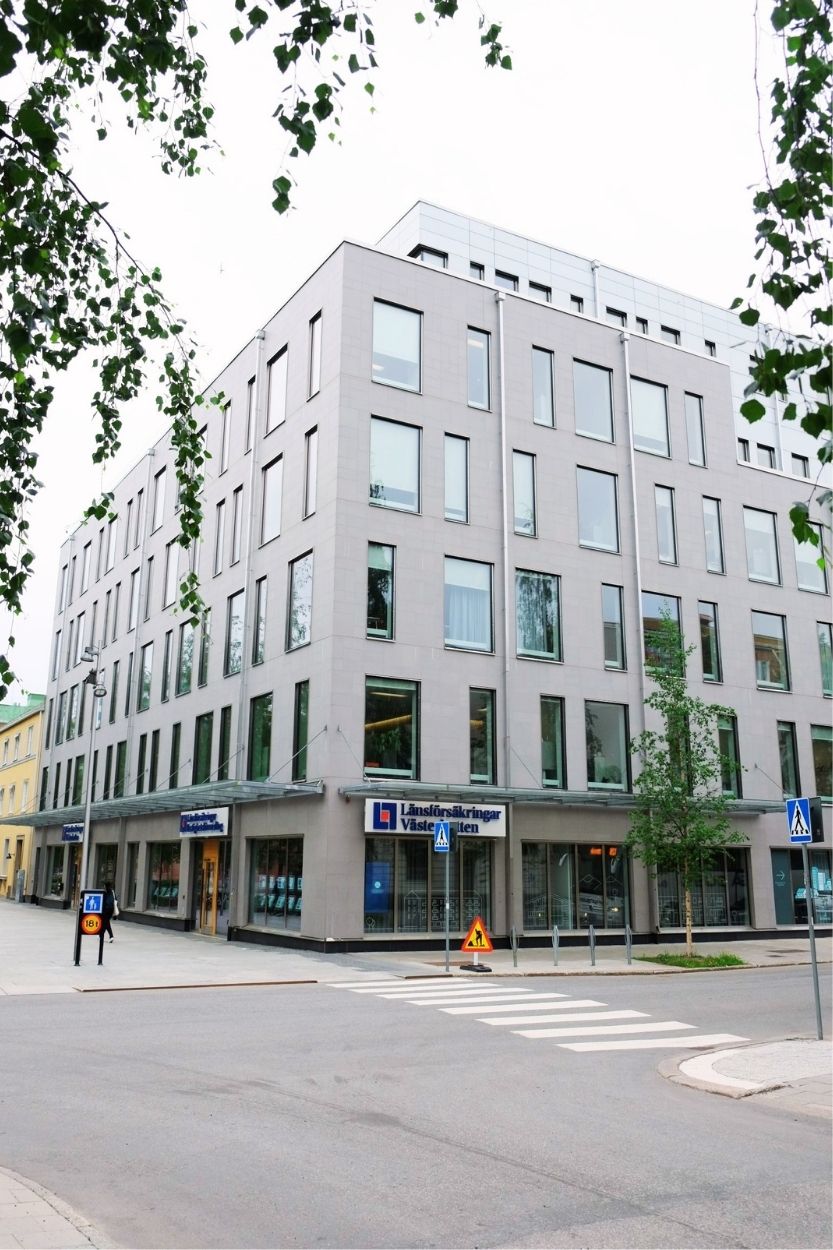 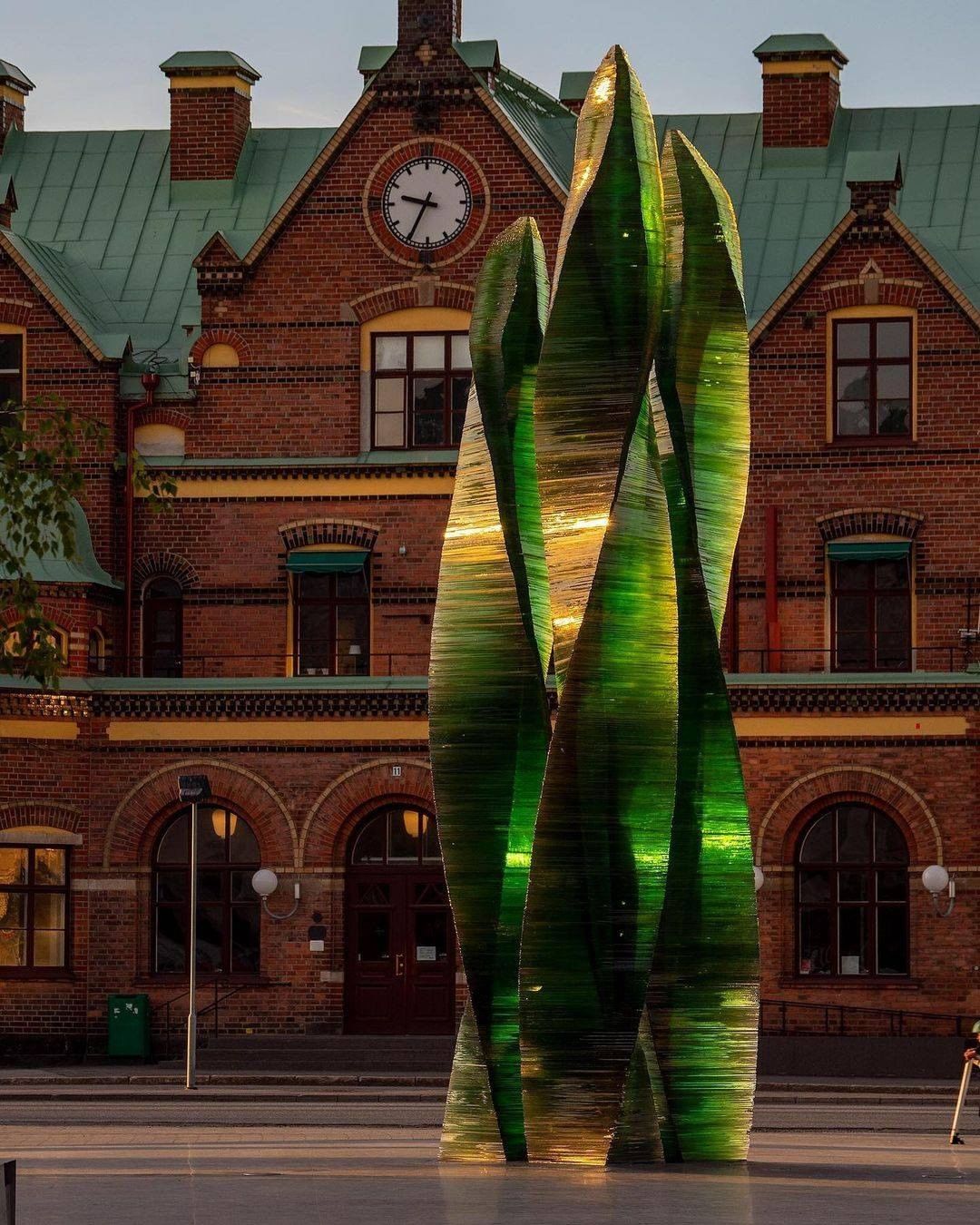 At the top of Rådhusesplanaden are the so-called Bågenhusens wings (s) that form the entrance to the esplanade. Bågenhuset was built in the early 1950s and should in its time be seen as both dominant in contrast to the low wooden city of Umeå but also as an elegant building with metropolitan expression. 70 years later, the architectural style still holds.

Once out on Järnvägstorget you look at Grön eld (u), a glass artwork by Vicke Lindstrand and behind it is the railway station, which is the counterpart to the City Hall. The railway can be described as a star site with a continental model, designed by Folke Zettervall and built in 1896.

Fun fact! Vicke Lindstrand's artwork Green Fire contains a hidden secret! In 1970, when the artwork was built, the 25-year-old Lennart Johansson placed a picture of the Marxist-Leninist theorist, politician and revolutionary Mao Zedong in one of the glass plates. It is said that the picture can still be seen today.

The tunnel between Umeå center and the Haga district is not only a link between the districts, it is also a connection between the railway platforms that form a large gesture, where art is integrated into the architecture and construction of the underpass. The wide and flat sloping ramp follows the bend of the western Bågenhuset. The walls of the outer turn are clad with rear-illuminated glass panels representing diffuse birch trunks. Other walls are covered with white glass mosaic, which captures and amplifies the light that falls in. Since security has been an important theme in the planning, the dark part is equipped with generous lanterns. The tunnel offers a holistic experience built around quotes from the Västerbotten author Sara Lidman's work under the collective name "Lev!". Bird chirps from speakers give an exotic feeling even on the bitterest Norrland winter day (or the bitterest northerner!). This is also one of Umeå Municipality's many examples of making visible examples of successful security-creating urban planning with a gender perspective. Architects have been Lennart Sjögren, and Mattias Nordström and artists: Gustavo Aguerre and Ingrid Falk. 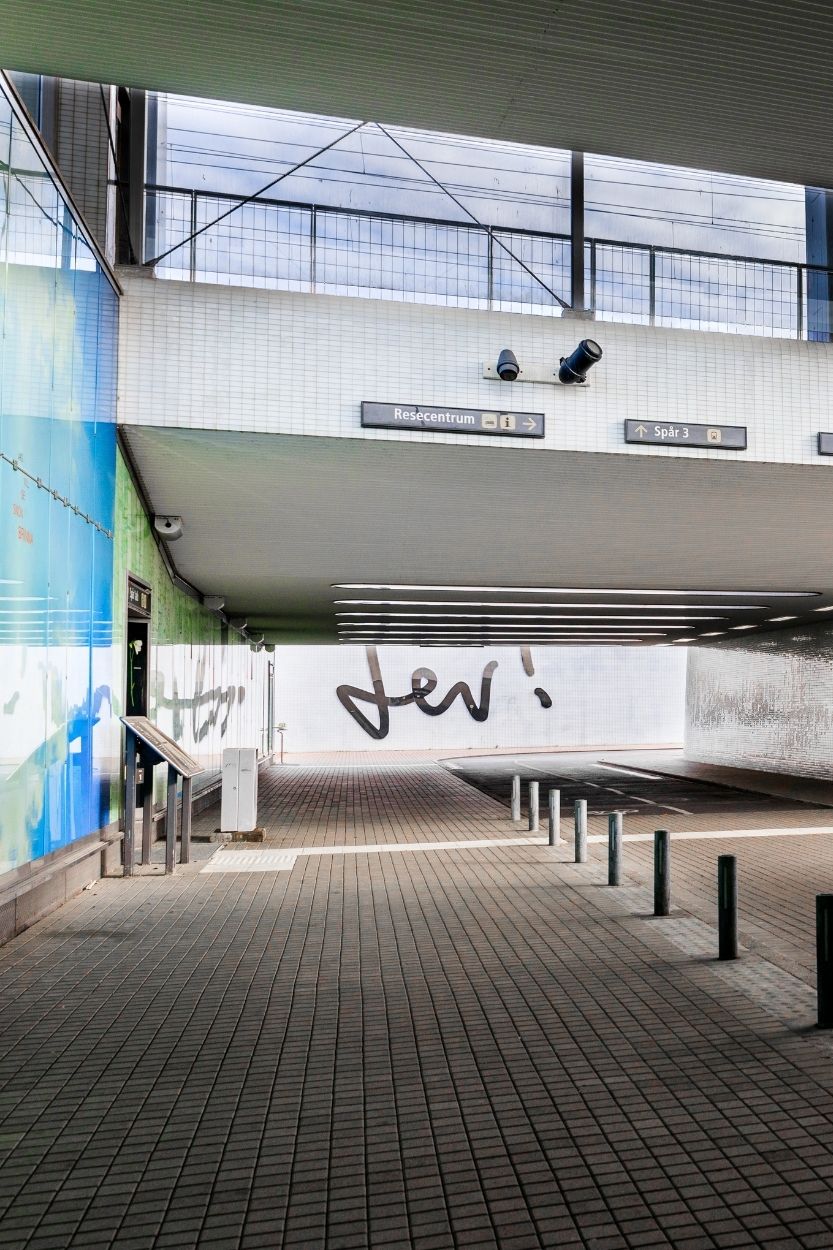 The architecture guide is produced togheter with the former city architect Tomas Strömberg. You can combine this guide with the municipality guide between 2001-2013.  Find it here.