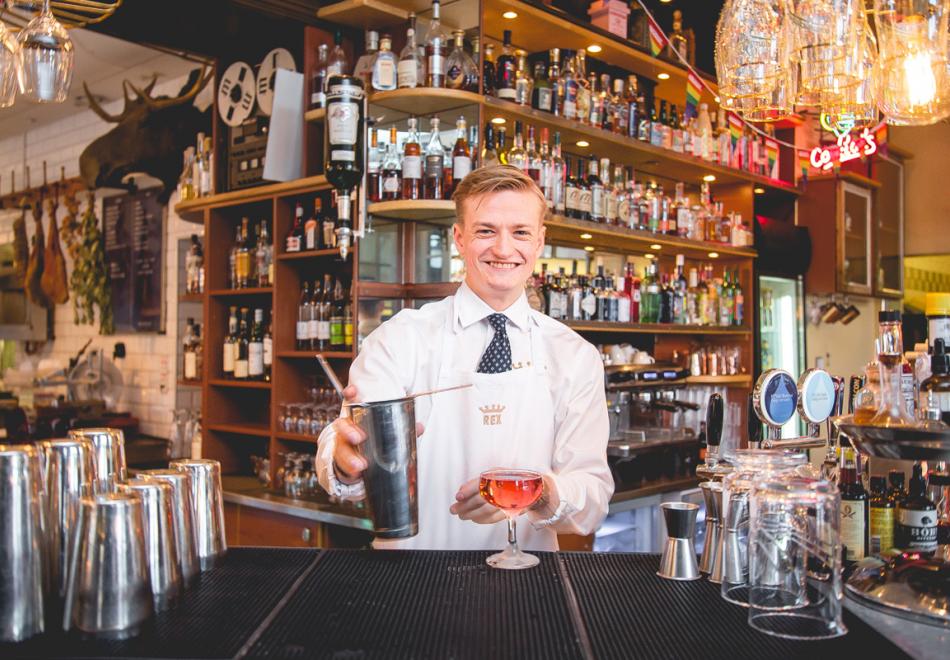 Conference dinner
Here you will find suggestions on restaurants suitable for larger parties.

In the beautiful town hall building from 1892, in the middle of central Umeå lies Rex. Bar, Brasserie, beer cellar, cocktail bar, bistro, nightclub and conference rooms in the same house. The large party room seats 110 people at round tables or up to 200 people with traditional long tables. Rex offers a concept for between 250-750 people called "The whole house". Each guest receives a badge in a band around the neck, which has several different stations with meals and drinks marked on it. The guests then travel around the entire house to get the various meals and drinks from the different stations, making this a natural mingle.
Information

In central Umeå, right on the Umeälven river, is Sjöbris. Two boats that together with a large glazed floating dock create the most fairy-tale place to dine - all year-round. With a focus of quality and taste, charcoal grilled, wood oven baked and seafood is served. Up to 600 people can eat a seated dinner simultaneously during summer.
Information

At Umeå University's campus, adjacent to Aula Nordica, is the restaurant Universum. With fantastic lighting and a large, lovely room, over 600 people can eat seated banquet dinner and 900 people standing mingle meal.
Information

Restaurant in a cozy atmosphere with a Spanish touch. On late Fridays and Saturday nights, Cinco turns into a nightclub. The food idea is based on the sharing concept, where the guests order and share the food at the table. Here, Latin American tapas are prepared with lots of love and hand-picked ingredients. Up to 350 people can eat a seated dinner here.
Information

In Elite Hotel Mimer's largest hall, Mimersalen, the former auditorium, everything from lectures and conferences to banquets, dinner theaters and wedding dinners are held. The hall accommodates 120 people at round tables and 160 people in traditional long tables. The food is made with great care by a dedicated team led by a chef who has been involved in preparing the Nobel dinner for two consecutive years.
Information

In the First Hotel Dragon's largest hall, Salongen, the walls can be colored according to your wish. You will also have access to a stage with technology and projector screens. Up to 200 people can eat a banquet dinner here.
Information

In Umeå Folkets Hus you will find the Swan-labeled Restaurant Apple which has many shapes. The venue can switch between everything from hosting a conference lunch or a corporate party to concerts and tavern shows. Up to 700 people can enjoy food with organic and locally produced ingredients. Of course, the size of the room is easily changed to create a pleasant environment for parties of 250 people. There is also technology and a stage for dinner entertainment.
Information