It’s been called one of the worlds coolest restaurants by The Guardian, awarded for its work on sustainability and praised by White Guide for its capacity to always deliver on top while constantly cultivating and expanding the concept. Umeå’s Gotthards Krog wants to inspire an entire industry to change.

Walking into Stora Hotellet is like stepping onto the scene of a Wes Anderson-film. Its quirky aesthetics is far from the patented minimalistic light Scandinavian cool we’ve gotten used to in Swedish hotels. Instead, we find deep green and aquatic tones, gold plated details, massive wooden interiors, kitschy art and loads of naval details. The reception area is made of a huge glass disc resting on curling octopus arms carved in wood. From the ceiling multiple rows of golden chains create a hypnotic wave pattern. The interior design is a nod to the buildings rich history going back to the late 19th century when sailors and tradesmen stayed in the hotel. At the reopening of 2014 Stora Hotellet was quickly named ‘The World’s Best Boutique Hotel’ at the Boutique Hotel Awards. The famed Norwegian design agency Stylt Trampoli created the design of both the hotel and Gotthards Krog. 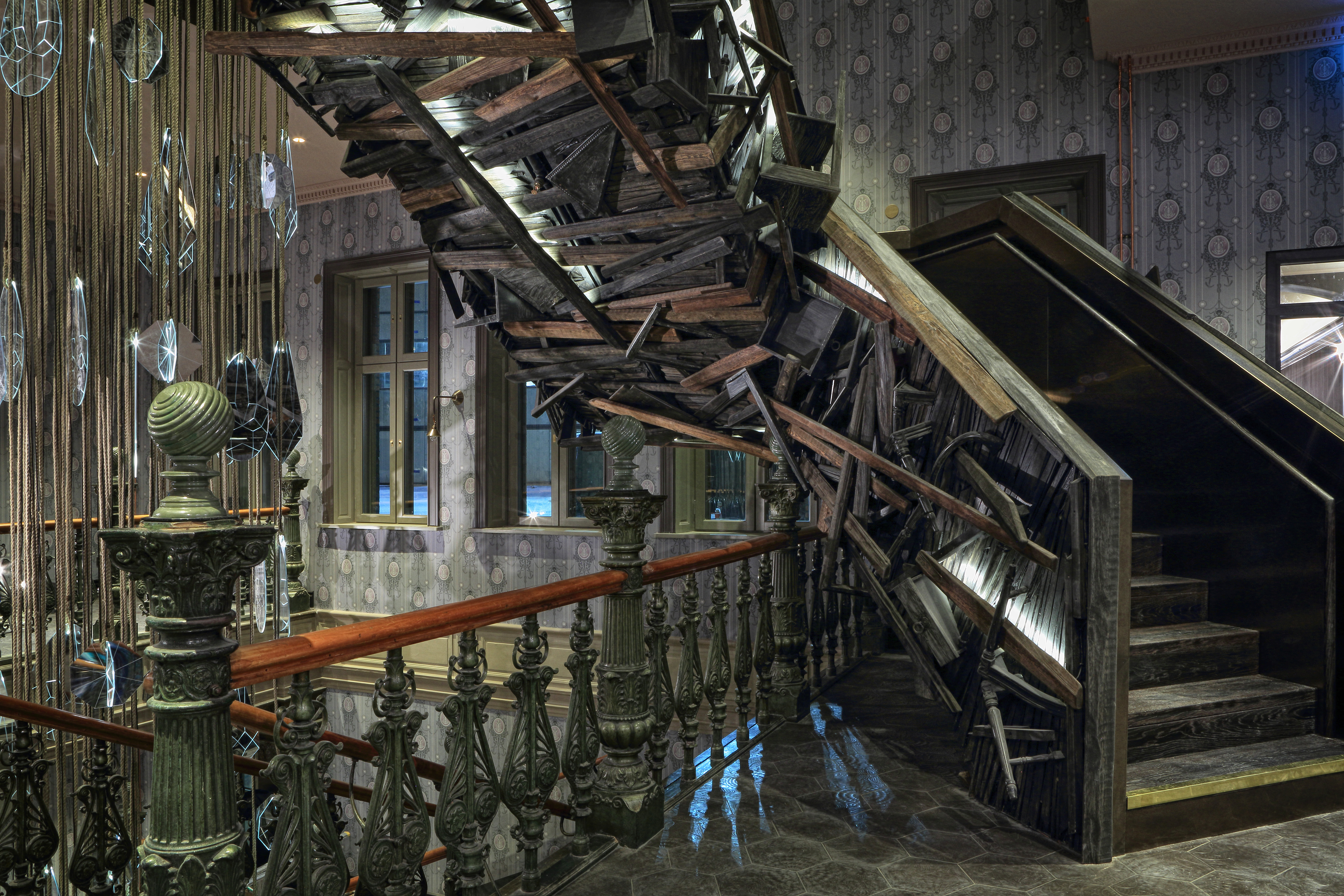 Stora Hotellet has been hailed as one of the world's best boutique hotels.

A foundation of green
Anders Samuelsson sits down at a table on the glass roof-covered piazza in the Väven Culture House. As the head chef of Blå Huset – a family-owned group with hotels, restaurants, and conference establishments – Anders Samuelsson is responsible for all meals served in the different settings. Aside from Gotthards that means Kulturbageriet, Fika, Sävargården and the conference floor P5. Throughout all of this you’ll find sustainability is the common ground. 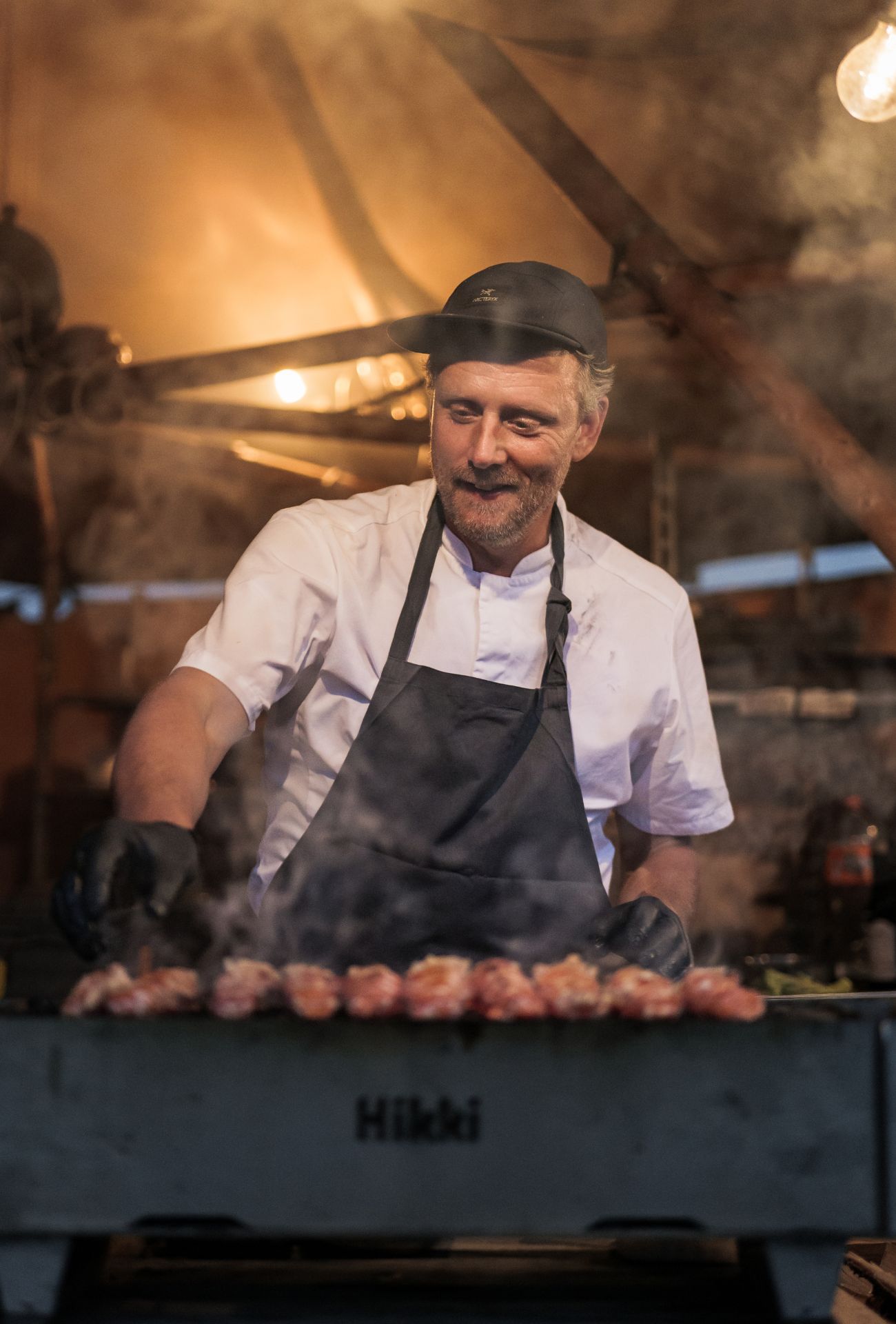 –    We want to cook smarter, from the very start our plan was to focus on veggies and cut down on meat. That’s the road we’ll all have to go down at some point anyway, we wanted to show that it is possible to create sustainable dining experiences where greens are the star. 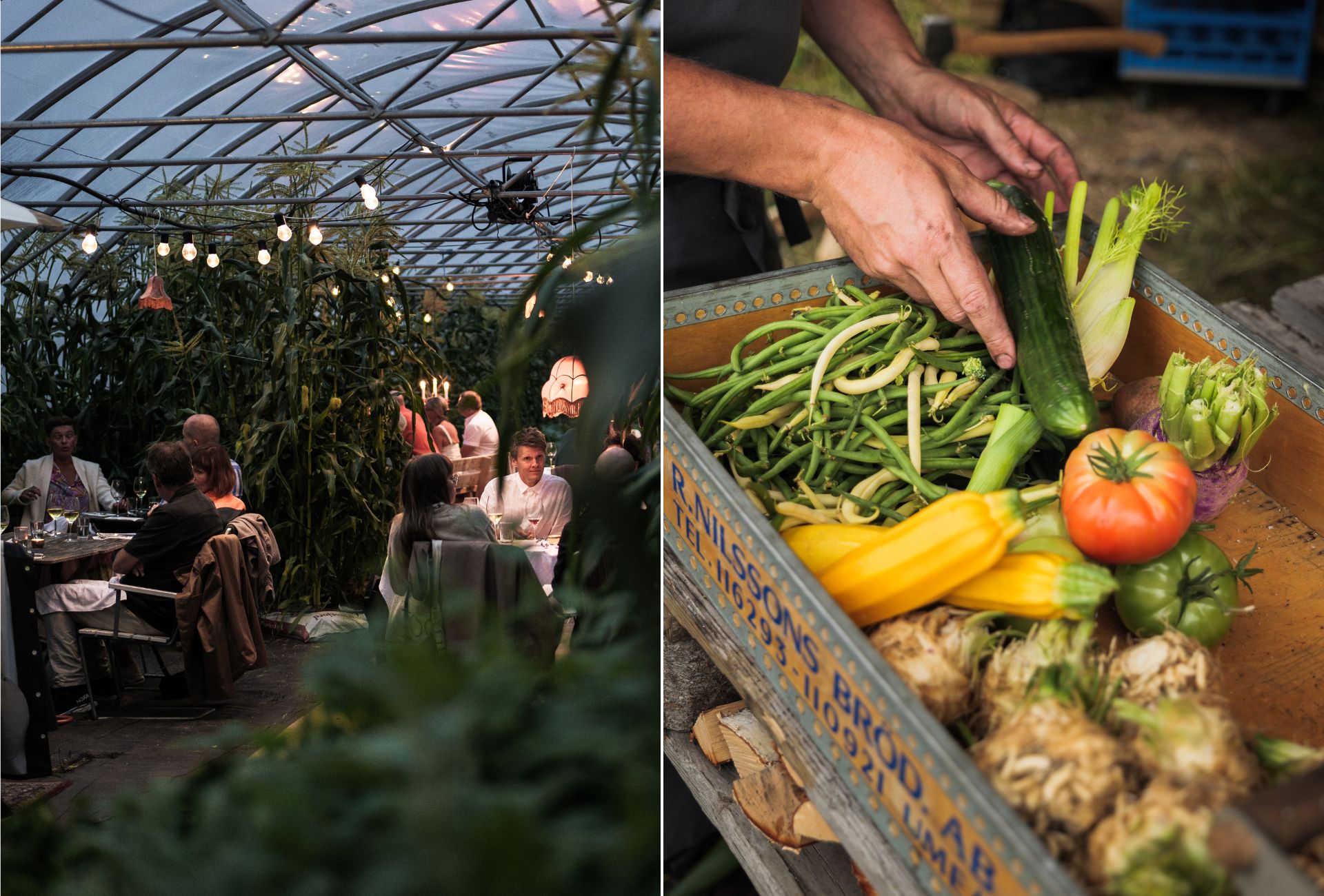 At the farm in Älvåkern, every autumn a number of sought-after places for dinner in the greenhouse are released, you simply cannot get fresher vegetables.

And at Gotthards the veggies do hold center stage. The initiative “Svinngott” was a collaboration with wholesaler Martin & Servera let Gotthards buy one ton of discarded fruits and greens every month, creating beautiful and inspiring plates out of veggies that was set for the garbage dump. In 2014 Blå Huset started their own farm at Älvåkern in Umeå. This provides the all the restaurant group with locally produced fruits and vegetables, while simultaneously acting as a place of inspiration and learning for the staff.

–    The farm is the core of our sustainability efforts. It’s as much a school as it is a pantry, our staff from the restaurants all put in work in the fields – sowing and harvesting what will eventually end up on the guests’ plates, says Anders Samuelsson.

Their own mini market
Since September of 2021 Gotthards sell vegetables at their own little “farmers market”, also located on the Väven piazza. The neighbor Duå offers a curated selection of delicacy’s’, Två Fiskare serves local seafood and Kulturbageriet sell artisan bread and pastries. The piazza has become the main meeting place for Umeå’s growing group of foodies.

–    Our mission is to make all our business ventures and guests’ part of the solution for a more sustainable society. To inspire change we need to create truly enjoyable experiences, this means constantly tweaking and bettering every part of every meal with both taste and sustainability in mind, says Anders Samuelsson. 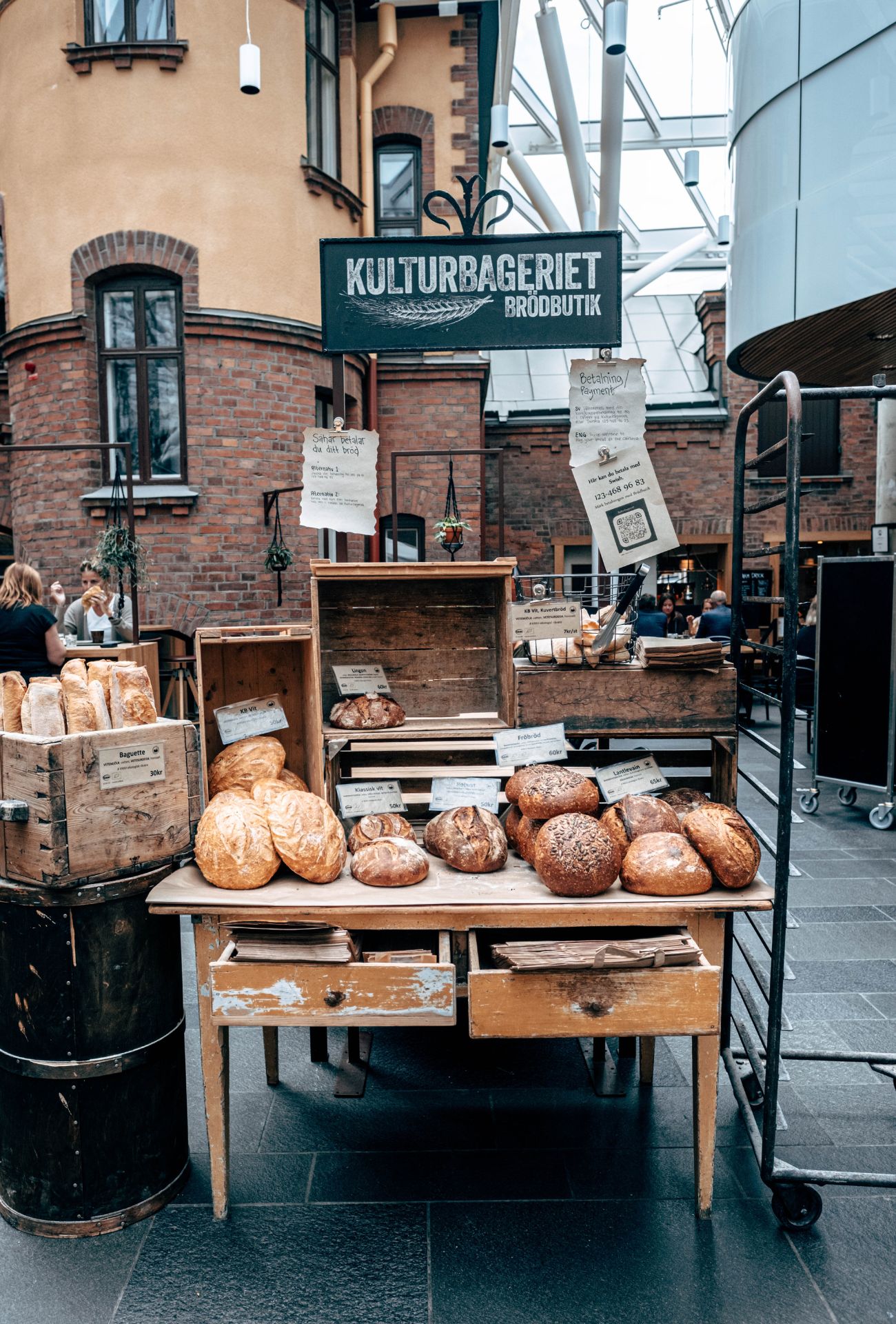 The cultural bakery is part of the activities in the Blue House. Here, too, sustainability and craftsmanship are in focus. 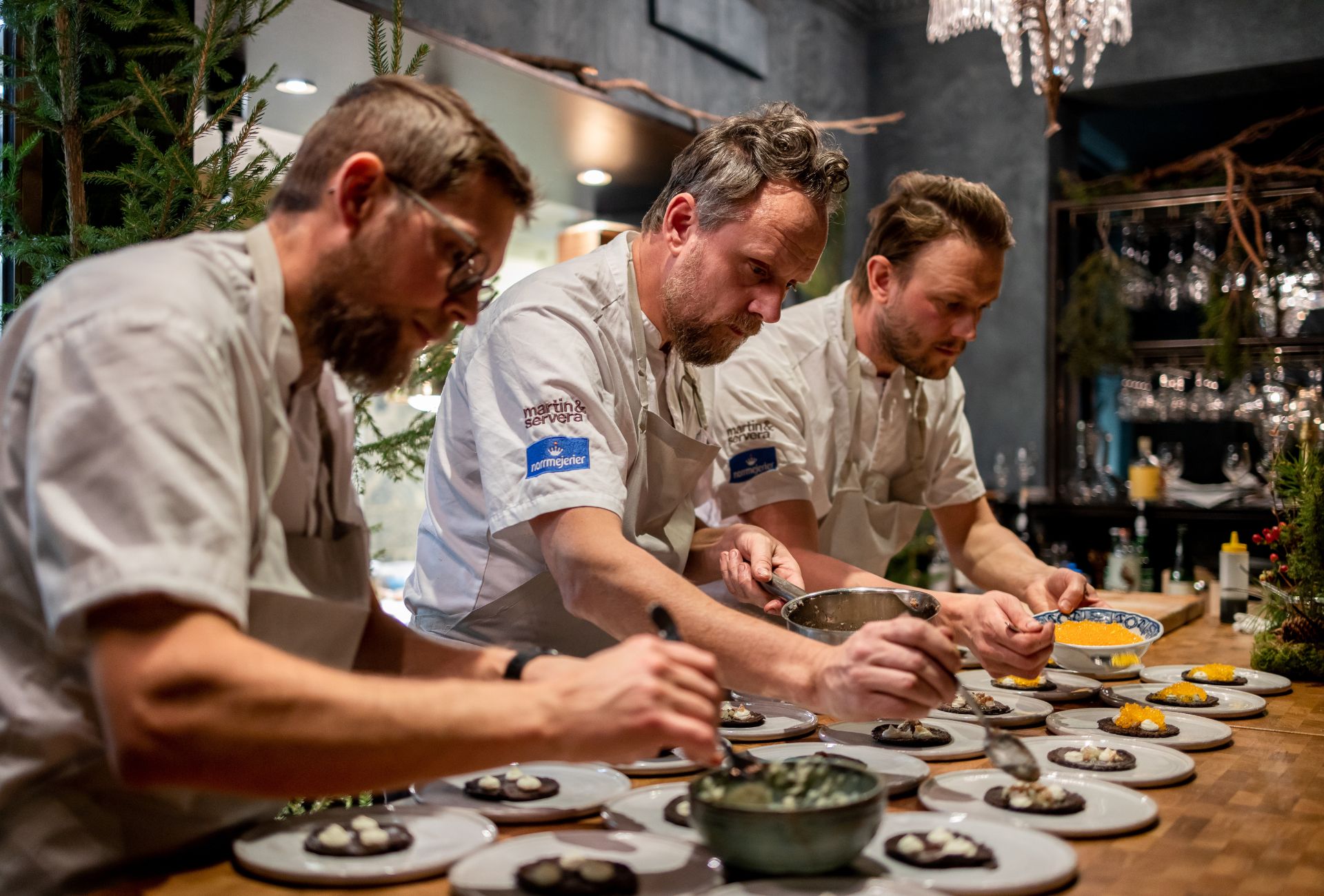 When the British newspaper The Guardian chose 10 of the world's coolest restaurants, Gotthards was one of those highlighted.

Prized and acclaimed restaurant
And the work on sustainability has not gone unnoticed. The 360° Eat Guide ranks the best restaurants of the Nordic considering both food and sustainability, with Gotthards being the only restaurant of northern Sweden making the list with the likes of Noma, Aira, Fotografiska and Amass. In 2018 Gotthards was named The Years most Sustainable Restaurant by the network “Sustainable Restaurants”. In fact, Gotthards was named “One of the World’s Coolest Restaurants” by The Guardian soon after opening in 2015.

–    Nationally, Gotthards is known in the business, but locally I’m not sure people in general know the way we work. It’s always great when your work gets recognition, but the real goal is being part of a much larger movement to create true change, says Anders Samuelsson. 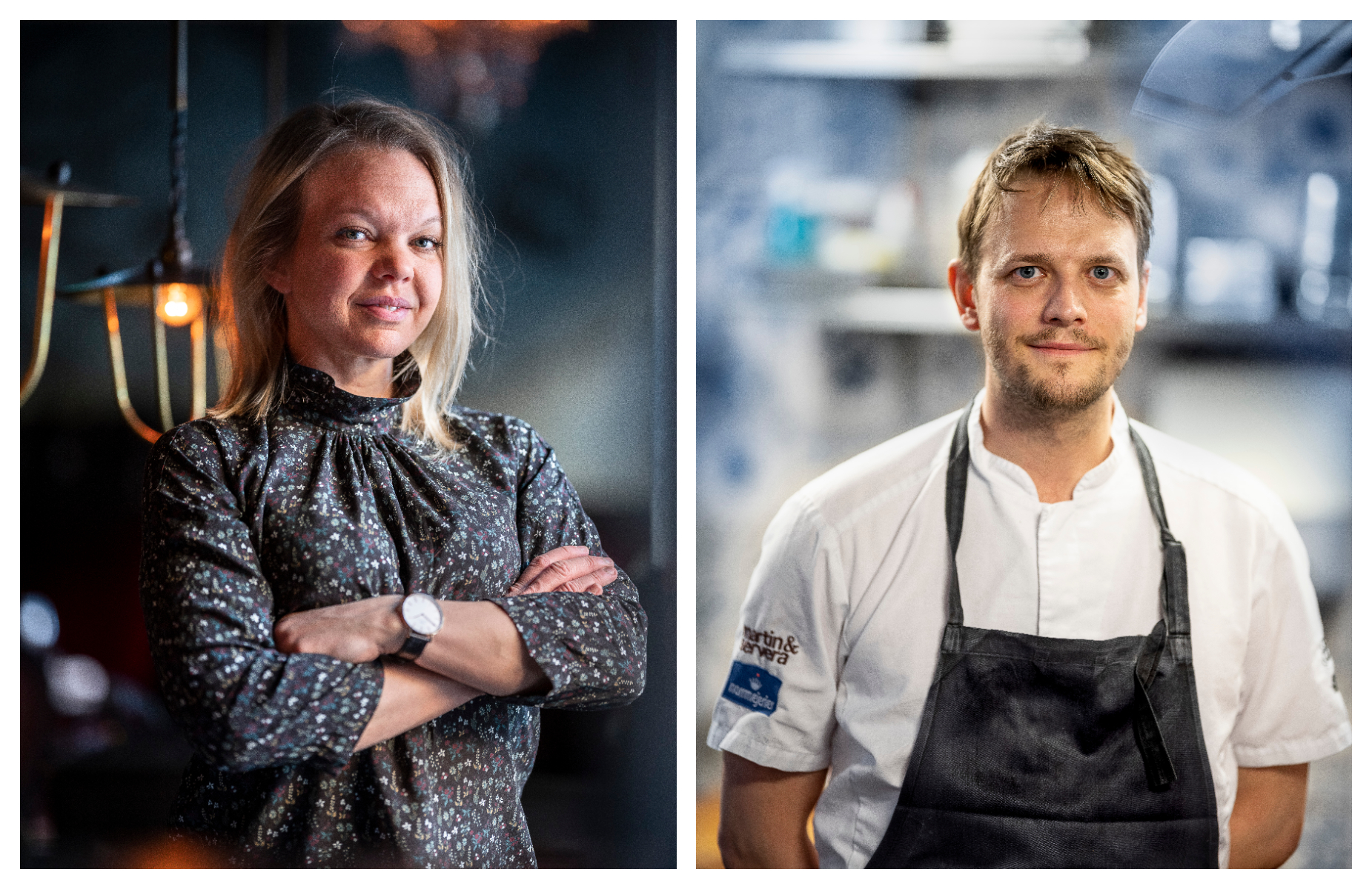 Lison Westermark is the restaurant manager and Olof Håsteen is the chef at Gotthards Krog. Photo: Andreas Nilsson